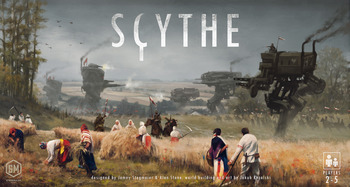 "The ashes from the first Great War still darken the snow in 1920s Europa. The capitalistic city-state known simply as “The Factory,” which fueled the war with heavily armored mechs, has closed its doors, drawing the attention of several nearby countries. With characters from five factions converging onto a small but highly desired swath of land, who will gain fame and fortune by establishing their empire as the leader of Eastern Europa?"
Advertisement:

Scythe is a 2016 board game published by Stonemaier Games, designed by Jamey Stegmaier and with art by Jakub Rozalski. Each player represents a faction of Europa, a fictional version of Europe that is trying to rebuild itself after World War I, set in the alternate reality of 1920+. The factions consist of leaders (and their Loyal Animal Companion), workers, and four giant mechs.

Besides its fantastic artwork, Scythe is known for its incredibly successful Kickstarter campaign that raised $1.8 million dollars.

In addition, several minor expansion and a spin-off has been released: