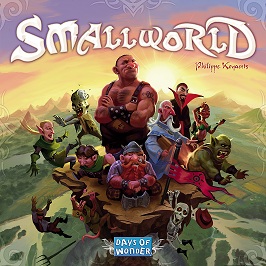 After all...
It's a world of Slaughter after all!
Advertisement:

Created by Days of Wonder, Small World answers the question, "What would happen if a Euro Game company decided to produce a lighthearted Mythology strategy game?" by throwing just about all the known fantasy races together onto the same world map in a simultaneous bid for survival and conquest - creating an odd genre-blender: a sort of Euro-fantasy-semi-war-game.

Small World is, at the same time, more and less reliant on chance than its better-known board game analogue. Dice are downplayed in combat and, instead, the majority of the luck factor lies in generation of playable races. There are two decks: Racial banners and Special Power badges, each adding a power or restriction while in play and modifying the number of troops available to the player. These decks are shuffled and laid out in pairs, and competition often starts with a race to get a particularly synergistic race/power combo first.

A unique twist compared to comparable board games is that players occasionally need to put their existing empire into decline: players gain victory points from the territory that both their current emprie and their declined empire control, but the declined empire is limited to one piece per area and cannot continue expanding.

Several expansions have been released, adding new Powers and Races.