Our Kobolds Are Different 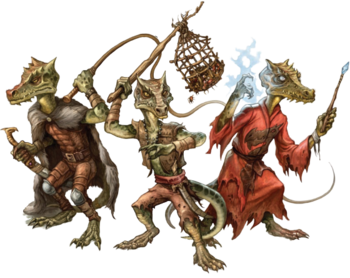 Aventurians are familiar with many different kinds of kobolds, such as the hardworking and friendly Warhome hammerlings, the Warunk imps, and the dexterous Angbar gnomes. Dwarves fear bosnickels in particular because they can convert precious metals and stones into worthless junk with just a touch. Invisible teasers sit on people's necks and manipulate them into causing mischief. Bookbolds create chaos in libraries, while klabauters are practically cherished at sea for the aid they give to ships and crews.
—The Dark Eye: Aventurian Bestiary
Advertisement:

Kobolds originate in Germanic folklore, where they were goblin-like spirits alternatively believed to live in mines, in households or aboard ships. They were a fairly diverse lot, and ranged in personality from helpful household spirits to cruel tricksters. In this meaning, which is still prevalent in German-speaking areas, "kobold" is used as a catch-all term for humanoid fairy beings in European folklore, and in some European languages the term is still used as translation for "goblin", "gnome", "leprechaun", and similar things.

In Anglophone media, kobolds remained relatively obscure until they showed up in Dungeons & Dragons, at which point they entered the ranks of uncommon Fantasy races. From there they spread to Japanese media, where they are more commonly depicted as canine creatures. Due to their origins as mine-spirits, modern fantasy kobolds are almost always depicted as living underground, either in caves or in complex tunnel systems they dig themselves. They're often prolific miners, and may be depicted as skilled engineers and crafters.

Kobolds are rarely dangerous or powerful creatures. They're generally stuck firmly at the bottom of the Sorting Algorithm of Evil, usually either as minor nuisances or as weaker minions of more powerful beings. They will often rely on cleverness or sheer numbers to face stronger foes.

In terms of appearance, they are typically short, goblin-like humanoids that may or may not have varying degrees of resemblance to other mammals, chiefly canids or rodents. However, in works influenced by Dungeons & Dragons, which originally depicted them as doglike humanoids before giving them their current reptilian look, they can resemble miniature Lizard Folk or Draconic Humanoids.

See also Our Goblins Are Different, Our Gnomes Are Weirder and Our Dwarves Are All the Same, for other fantasy races with similar origins and habits.

As the dog-like variety often seen in Japanese works, Polt has nearly endless amounts of energy.

As the dog-like variety often seen in Japanese works, Polt has nearly endless amounts of energy.