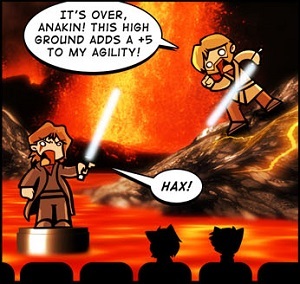 "But there's a problem... X from the sub-zero sector ARC are in Sector 6 (NOC) and they... They've been changed by the cold. If you absorb one, you'll be frozen from within. This seems like a deliberate tactic."
— Adam, Metroid Fusion
Advertisement:

Some Video Games incorporate maps into the fighting, and the terrain in them can add an element of Home Field Advantage to the unit or monster on it. Whether it's a boost to Power Level, cover from fire, or more exotic things like invulnerability, or even randomly teleporting the character, depends on the game, map, and even color of the tile.

These effects add an element of strategy and chance to the game, making otherwise milquetoast maps and units dangerous and unpredictable as they interact with the environment to great effect, whole strategies can be devised around luring an enemy into a weak spot.

Outside of video games, Comic Books, Film and Literature are fond of assigning a given character or army an edge over opponents if they fight in an area they're familiar with or have had time to trap.

Also Truth in Television. Most military campaigns involve efforts to take advantage of large-scale terrain features like rivers; battles are often fought over high ground; and individual soldiers will routinely try to Take Cover! behind the sturdiest terrain available.

Often overlaps with Weather of War, as weather can further compound the advantages and disadvantages of existing terrain, in some cases even reversing them. That fortified wooden watchtower in the middle of an open field becomes a much less attractive place to make your last stand in a lightning storm, for instance.

Not to be confused with I Have the High Ground, which only looks cool without having any actual effect. Field Power Effect is a supernatural variant with a bigger area of effect. Mucking in the Mud is a common subtrope. See also Improv Fu.

"You were the Chosen One!"

Obi-wan Kenobi defeats Anakin "Darth Vader" Skywalker on Mustafar, and mourns his role in the Jedi Purge and the apparent failure of the prophecy of the Chosen One.

Example of:
Thread of Prophecy, Severed

"You were the Chosen One!"

Obi-wan Kenobi defeats Anakin "Darth Vader" Skywalker on Mustafar, and mourns his role in the Jedi Purge and the apparent failure of the prophecy of the Chosen One.