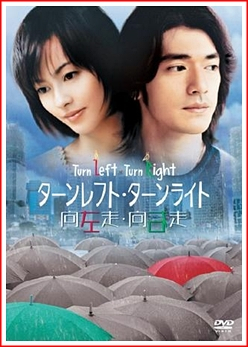 Turn Left, Turn Right (向左走·向右走, Heung joh chow, heung yau chow in China) is a 2003 Hong Kong-Singaporean film set in Taipei, Taiwan. It centers around two people who are seemingly perfect for each other - shy violinist John Liu and ditzy professional translator Eve Choi, who meet once as children and, by chance, meet again as adults. They always pass by each other, but never seem to meet - and now that they are reminded of each other's existence, fate transpires to keep them apart.

Directed by Johnnie To and Wai Kai-Fai, Turn Left, Turn Right stars Takeshi Kaneshiro and Gigi Leung as the leads. It is based on an illustrated book by Jimmy Liao, A Chance Of Sunshine.