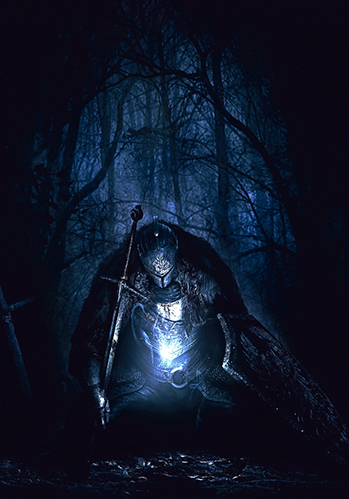 Go beyond death.
"Like a moth drawn to a flame, your wings will burn in anguish, time after time.
For that is your fate... the fate of the cursed."
Advertisement:

Long ago, in a walled off land, far to the north, a great king built a great kingdom called Drangleic. A place where souls may mend the ailing mind of humans cursed by the Darksign, an augur of darkness that grants its bearer the inability to die. But in return, the curse will take your past, your future, your very light, until you're something other than human. A thing that feeds on souls. A Hollow. And so, one day all "Undead" find themselves standing before Drangleic's gates, without really knowing why...

You take the role of one of these Undead, dubbed The Bearer of the Curse, an untold number of years after the events of the first Dark Souls. After arriving in a desperate gambit to not succumb to the curse of undeath and discovering all that's left of Drangleic is a decrepit fallen kingdom, you are tasked with seeking out its long-lost king, Vendrick. But to do so, you must first take the souls of the four Great Ones scattered across the ruins of Drangleic whose power may yet lead the Bearer of the Curse to Vendrick… and perhaps the truth behind Drangleic’s downfall.

3 Downloadable Content episodes, titled The Lost Crowns Trilogy, were released between July and September 2014: The Crown of the Sunken King, The Crown of the Old Iron King and The Crown of the Ivory King. Each episode adds new areas, enemies, bosses, and equipment, while delving into the past of previous kingdoms that rose and fell where Drangleic now stands.

An Expansion Pack update patch, Dark Souls II: Scholar of the First Sin, followed on February 5, 2015. It added a new story NPC, augmented item descriptions and re-balanced gameplay. A retail "all-in" Game of the Year Edition was released the same day with the update features and all 3 previous DLC. A "high-spec" Updated Re-release version was also released on April 1, 2015 for Direct X11 PCs and April 7, 2015 for PS4 and Xbox One. The "high-spec" version included all the aforementioned content, upgraded graphics and remixed levels.

Editor of TV Tropes... Seek tropes. Larger, more powerful tropes. Seek the Index, that is the only way. Lest this wiki swallow you whole.. as it has so many others.
Feedback