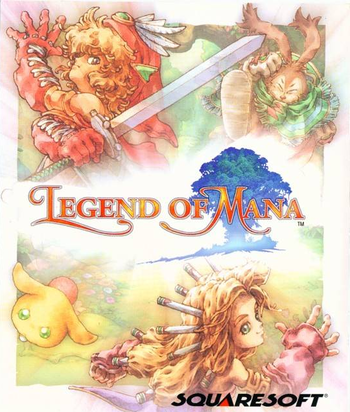 Nine centuries ago, the Mana Tree burned to ashes.
The power of Mana lived on inside Mana stones, enchanted instruments, and artifacts.
Sages fought with each other for control of these last remnants of Mana.
Then, after hundreds of years of war, as the power of Mana began to wane, those who sought it grew scarce, and the world returned to peace.
After that, mankind grew afraid to desire. Their hearts filled with empty emotions, and grew estranged from my hands. They turned their eyes away from my infinite power, and were troubled by their petty disputes.
Remember me!
Need me!
I can provide you with everything!
I am love.
Find me, and walk beside me.
Advertisement:

Legend of Mana (1999) is the fourth game in the World of Mana series, and the only one released for the fifth console generation. It was originally developed for PS1. It was then re-released on the North American PlayStation store as a PSOne Classic on March, 22, 2011 and a full remaster for the PlayStation 4, Nintendo Switch, and PC via Steam was released on June 24, 2021 with HD 2D backgrounds and an arranged soundtrack as well as some quality of life upgrades like saving (almost) anywhere and turning off enemy encounters as well as including the "Ring Ring Land" mini game that was previously Japan exclusive. The remaster was then brought to iOS and Android on December 7, 2021.

This one was developed not by Koichi Ishii but his director, Akitoshi Kawazu (SaGa), and it's still the most peculiar entry. It's really just a collection of vignettes in contrast to the Doorstopper novels of Final Fantasy VII, Xenogears and their ilk. (To say nothing of the previous Mana titles.)

You control a nameless main character, pick their gender, then set off to roam the world of Fa'Diel. It operates like a dungeon crawler with some sandbox elements: You collect artifacts that you place on the overworld map, magically turning them into towns and dungeons. Various quests and events will occur in these places. Although some are melancholy, Slice of Life scenarios, there are three over-arching plots and several minor ones that crop up. You only need to finish one major arc to beat the game, but it is possible (though laborious) to see every single event in one playthrough.

The battles are similar to Trials, with a few quirks:

The hand-drawn art style offers a unique visual hook, and the score features some of Yoko Shimomura's less-known (but no less fantastic) soundtrack work.

On June 2021, Square-Enix and Warner Bros. Japan announced an anime adaptation of the game, titled Legend of Mana: The Teardrop Crystal. It is slated to air sometime in 2022, and will center around one of the game's story arcs about the Jumi.