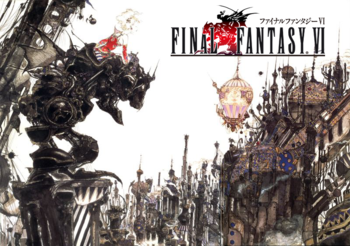 The ancient War of the Magi... When its flames at last receded, only the charred husk of a world remained. Even the power of magic was lost. In the thousand years that followed, iron, gunpowder, and steam engines took the place of magic, and life slowly returned to the barren land. Yet there now stands one who would reawaken the magic of ages past, and use its dread power as a means by which to conquer all the world. Could anyone truly be foolish enough to repeat that mistake?
— Opening narration, Game Boy Advance version
Advertisement:

Final Fantasy VI, the sixth game in the bomb-droppingly popular Final Fantasy series, is the third and final 16-bit entry, released in 1994 for the Super Nintendo Entertainment System. The game was originally marketed outside Japan as Final Fantasy III because only two other games in the franchise (Final Fantasy and Final Fantasy IV) had been given international releases at the time.

A thousand years ago, a great conflict called the "War of the Magi" brought the world to the brink of ruin. When the flames of war faded, humanity was almost extinct and magic was believed to be lost. Over the next millennium humanity rebuilt and rediscovered technologies and innovations like gunpowder, steam power, and ironworking. Civilization was entering a steampunk era of industrial revolution.

Now, however, the stirrings of war are brewing again. An Empire in the south seems to have rediscovered the mythological power of "magic" and is building weapons combining magic and machinery. The Returners, an underground resistance movement, are fighting against the rising tide but it is a losing battle as the Empire conquers the south and begins to push into the north.

Against this background a young woman named Terra Branford comes to the attention of the Returners; she has no memories, but seems to be a former soldier of the Empire, and is able to naturally cast magic. The Returners convince her to aid them in discovering the secrets of the Empire's power and fight back against them, but the battle between the two factions will spiral out of control in ways none of them could predict.

With fourteen playable characters, Final Fantasy VI boasts one of the largest rosters of any RPG of its era. To this day, it still holds the record among the main series Final Fantasy games for most playable characters, and provides nearly all of them with character arcs and sidequests. Most fall into broad categories that were introduced in earlier games, ranging from the simple Thief (Locke) and Monk (Sabin) to the more-exotic Dancer (Mog), Blue Mage (Strago), and Mime (Gogo). Setzer is a Gambler, which was a first for the series.

Magic is treated in a different way from other installments. Only two characters can learn magic by leveling up normally; one is part-Esper and the other a Magitek Knight. The others must equip Magicite, which is the crystallized remains of an Esper. Magicite comes with a handful of spells that you learn though experience, though naturally some take longer than others. Equipping it also alters your stats when you level-up, which makes things a bit more strategic. Lastly, Magicite doubles as Summon Magic and has a variety of effects in battle, be they offensive or defensive.

The game has been ported twice under the original title: the first came as one-half of Final Fantasy Anthology, a Compilation Rerelease on the PlayStation. It added a number of CGI cutscenes, replaced all censored sprites with their uncensored originals, made some minor script changes to improve accuracy, included bonuses like a bestiary and an art gallery, added a run ability which doesn't require the Sprint Shoes, fixed some well-known bugs and glitches, and changed the battle transitions for the world map and dungeons. Unfortunately, it suffered from slowdown and sound emulation issues, at the least its original release. Its Greatest Hits edition, while still somewhat slow, is a major performance upgrade over the original release.

The other port, released on the Game Boy Advance, is patched up even further: It includes a couple new quests, new gear, new Bonus Bosses, and four new Espers. It features a new translation which fixed some things (e.g. Ultima Buster's famously cryptic pre-battle speech on the meaning of life) while retaining many of Ted Woolsey's now-iconic original lines and name changes. The GBA port also uncensored certain elements...while confusingly censoring others that had been uncensored in previous versions. On a technical note, the GBA port fixed numerous bugs (while introducing some brand-new ones) and featured a brighter color palette and remixed music—the last of which remains a source of contention.

Square Enix re-released the SNES version on the Virtual Console in Japan, Europe and North America, and the PlayStation port on the PlayStation Store. A divisive version of the game was released for mobile devices and Steam, but was delisted in 2021. The original version is also one of the twenty-one games included in the SNES Classic Edition, alongside other Square-developed games Secret of Mana and Super Mario RPG. A remastered version in the Final Fantasy Pixel Remaster series was released on PC and mobile devices in early 2022.

Son of a Submariner!!

After escaping from the mines of Narshe, Terra Bradford is brought to Figaro Castle to have an audience with the king.

After escaping from the mines of Narshe, Terra Bradford is brought to Figaro Castle to have an audience with the king.