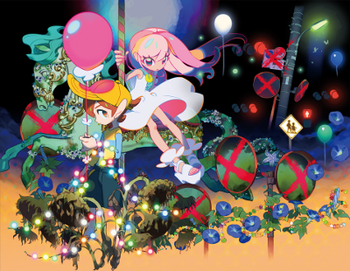 World's End Club, originally announced as Death March Club, is a game developed by Too Kyo Games that features a mix of puzzle and Visual Novel gameplay. It was given a partial release on September 4, 2020 for Apple Arcade, with the complete game and a Nintendo Switch version with English voiceover released on May 28, 2021.

In Japan, there is a class of underachievers gathered together from across the nation called the Go-Getters Club, who are noted to be unusual compared to their peers. One day, on a school trip, the class is caught in a rockslide while on the school bus and awaken in an abandoned underwater theme park.

Soon, the students encounter a robotic clown creature named Pielope, who tells them that they are now in a game of death where they will have to kill each other in order to win. Soon, the Go-Getters Club finds themselves embroiled in a game where they will have to fight for their lives, as mysterious powers awaken in them...and the world above starts to undergo some shocking changes of its own.

So begins a game of death for children, by children, starring children.

Not to be confused with World's End.

The road is so long, the nights are so cold,
But our friends have been there from the start.
Even if the world comes to an end,
Go-go-go-getters will never fall apart!