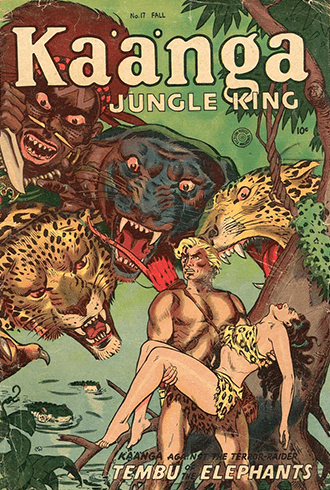 No wonder those cats are mad—you're wearing a leopard-skin Loincloth!
"Beware, beware the Bight of Benin. Where one came out, fifty went in."
Advertisement:

When not a run of Jungle Japes, the jungle is a harsh and hostile place, frequently deadly for its denizens, but even more ferocious to outsiders no matter what gear they bring with them. This jungle is treated as a semi-sentient entity; a soup of consciousness composed of the ferocity of its native life and climate. And it hungers. It devours sane minds with its stifling and claustrophobic atmosphere, infecting all who enter with a slow, creeping madness in an effort to make them its own. This same climate breeds fetid decay and disease, which likewise infests the body. On top of this, the marvels of modern technology count for nothing. The humidity of the jungle devours advanced technology in a trice. Keeping anything working is a constant, day-to-day struggle to keep up with the jungle's ruination, which further wears at the sanity and morale of any who try it.

The jungle's inhabitants don't make it any better. There tend to be hostile natives, cannibal tribes, and cat-, and lizard-people. It's also home to Big Creepy-Crawlies, poisonous and large constricting snakes, tigers, leopards, and other large cats, aggressive monkeys and apes, some of which are gigantic. The jungle's lakes, rivers, and swamps are full of crocodiles and piranhas. There are even dinosaurs and other prehistoric creatures in extreme cases.

If you’re a Jungle-Princess, you will most likely be a Damsel-in-Distress who spends the majority of the story almost being eaten or tied to a steak until the Nature-Hero comes. After all, this is a great place to be Captured-by-Cannibals.

The only way out is to die or go mad. Here, you can't imagine there's a world beyond the jungle. The jungle boils everything down to its rawest, most savage form.

God help you if you have to fight a war here, which isn't unknown.

See also Swamps Are Evil, Don't Go in the Woods, and Jungle Opera. Closely related to River of Insanity. Sort of like the Thirsty Desert, though the similar names are coincidental. For places commonly depicted this way, see Darkest Africa and the less urbanized versions of Holiday in Cambodia.