Film / The Lost City of Z 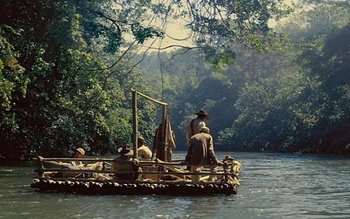 "Have I ever read Joseph Conrad? Why do you ask?"
Advertisement:

The Lost City of Z is a 2017 film written and directed by James Gray, based on the non-fiction book of the same name telling the story of British adventurer Percy Fawcett's quest to find a lost civilization in the Amazon.

In 1906, the Royal Geographic Society asks then-Major Fawcett (Charlie Hunnam) to trace the border between Brazil and Bolivia, as the two countries are seeking a neutral party to head off a boundary war. Despite enduring a classic River of Insanity voyage, Fawcett and his faithful aide-de-camp Henry Costin (Robert Pattinson) succeed in the mission and become fascinated by some pottery and carvings deep in the jungle where supposedly no humans — let alone civilized humans — had ever lived. Fawcett takes the then-unpopular position that the peoples of the Amazon built a sophisticated culture, which doubles as a critique of imperial attitudes toward the land and its natives. He becomes obsessed with proving his case, rather to the detriment of his family life, but learns a great deal about the jungle, its inhabitants, and himself.