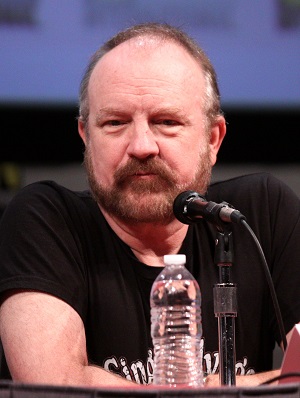 James Norman "Jim" Beaver, Jr. (born August 12, 1950 in Laramie, Wyoming) is an American stage, film, and television actor, playwright, screenwriter, director, and film historian. He is most familiar to worldwide audiences as the gruff but tenderhearted prospector Whitney Ellsworth on the HBO Western drama series Deadwood, a starring role which brought him acclaim and a Screen Actors Guild Awards nomination for Ensemble Acting after three decades of supporting work in films and TV. He portrayed Bobby Singer in the CW television series Supernatural and Sheriff Shelby Parlow on the FX series Justified. His memoir Life's That Way was published in April 2009.
Advertisement:

Beaver is generally beloved by fandom due to his role as a fan favourite on Supernatural and due to his warm interactions with his fans.