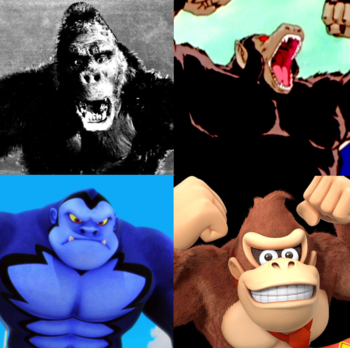 King Kong is one of the most famous and enduring movie monsters ever to be put to screen. "The 8th Wonder of the World" he was called since his 1933 debut. He has appeared in things from sequels to remakes, spin-offs, animated spin-offs, comic books and video-games. Thus, copyright-dodging spoofs trying to ape him are just as likely to exist. (Notably, while Godzilla is more difficult to knock off due to his unorthodox and outdated Tyrannosaurus-inspired design combining features of several other dinosaurs, King Kong, aside from his size, mostly resembles a typical gorilla or ape and thus is more difficult to copyright as a trademarked character.)

In most cases, a King Kong Copy takes the form of an ape, a giant creature, or a giant ape. They often live on an Isle of Giant Horrors, where they are worshipped or at least appeased by primitive peoples. As any visitors find out sooner rather than later, worship takes the form of offering a nubile young woman to the King Kong Copy. A "King Kong" Climb towards the end of the story is inevitable, followed by a long drop to their death after being shot at by fighter-pilots. Primal Chest-Pound may also be used. A Behemoth Battle with another giant monster (such as a Notzilla or a T. Rexpy) is optional.

Many King Kong Copies have names that sound vaguely like "Kong", including variants of "Congo", "Conga", "Ping Pong", etc.

Compare with the other Captain Ersatz/Expy Stock Parodies like Notzilla and Monkey King Lite.

Not to be confused with King Koopa Copy. That's the one that kidnaps princesses and breathes fire.