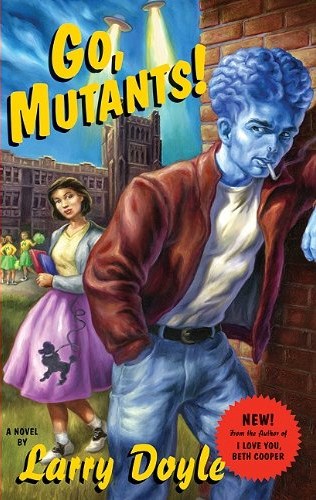 "No one understands me!"
It came to Earth... and now its spawn goes to high school!
Advertisement:

Go, Mutants! is the second novel from Larry Doyle, author of the critically acclaimed I Love You, Beth Cooper. It's a science-fiction story set in The '70s of an Alternate Universe, where the creatures of B-movie legend walk the streets along with ordinary humans. The story centers on J!m Anderson—teenage son of the late Andi Ra, an evil alien that once tried to conquer the human race—as he struggles through high school and life in an alien-unfriendly society. Rounding out the cast of creatures are J!m's friends, a radioactive biker ape named Johnny Love, a gelatinous blob posing as a fat kid named Jelly, and Marie Rand, an Ordinary High-School Student—and the love of J!m's life.

Apparently, it's being optioned for film. The author says he's writing the screenplay for Ron Howard, but he's likely joking about that.