Film / The Son of Kong 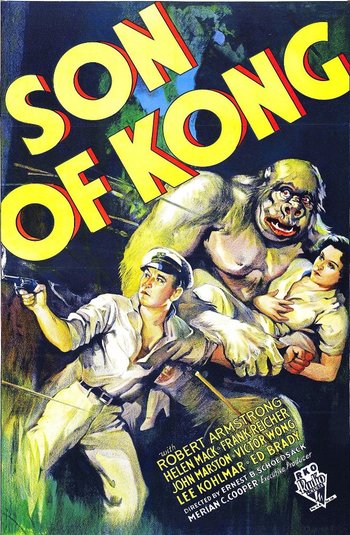 The Twelve Foot Ape Befriended them On the Island of King Kong!
Denham: You'll never catch a monkey that way.
Hilda: Did you ever catch a monkey?
Denham: Did I ever..? (laughs) Lady, you'd be surprised.
Advertisement:

The Son of Kong is the 1933 sequel to the classic monster movie King Kong (1933). Directed by Ernest B. Schoedsack, the film was rushed into production immediately following the success of the first film and hit theaters a mere nine months later. Robert Armstrong reprises his role as Carl Denham alongside Frank Reicher and Victor Wong reappearing as Captain Englehorn and Charlie respectively.

A month after Kong's rampage through New York, Carl Denham is now bankrupt following the countless lawsuits to pay for the collateral damage. To avoid being indicted, Denham flees with Englehorn to the East Indies to make a living hauling cargo. During a stop at the island of Dakang he meets a struggling entertainer named Hilda Petersen, and also finds there Captain Nihls Helstrom, the man who sold him the original map to Skull Island. Helstrom convinces Denham to return to the island by claiming it contains a great treasure, but this is all a ploy to leave Dakang before he's arrested for the murder of Hilda's father. After a mutiny that strands all parties involved on the island, Denham and Hilda run into an albino member of Kong's species, which Denham believes might be Kong's surviving son.

Special effects pioneer Willis O'Brien returned to provide the stop-motion visual for Little Kong and the creature of Skull Island, recycling assets from the first film to save on time and money.

Tropes in The Son of Kong include: