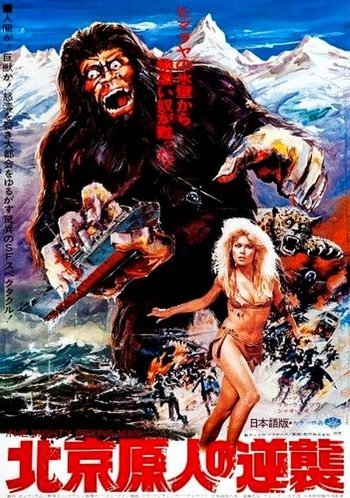 Nope, he's not a King Kong-knockoff, because he's an orangutan.
Advertisement:

Released to capitalize on the craze of King Kong (1976) the previous year, the entire film is wedged somewhere between a Captain Ersatz and a complete knockoff of King Kong, Recycled in Hong Kong. The parallels are painfully obvious, with some minor changes being its setting (from an uninhabited island in the Indian Ocean to the Himalayas, and from New York to Hong Kong), but is an otherwise rather transparent imitation with some additional plot elements lifted from Tarzan. It is, however, notable for being Roger Ebert's favorite Hong Kong monster film

- which, let's be honest here, isn't really saying much.

When giant footsteps belonging to what is supposedly a giant, ape-like cryptid named the "Mighty Peking Man" is spotted in the snowy mountains of the Himalayas, intending to have the cryptid captured for his own reasons, the Hong Kong tycoon Lu Tien, immediately organizes an expedition to locate the monster, one led by expert hunter Johnny (Danny Lee). But upon finding the beast, it turns out the monster, named "Utam" due to being a giant orangutan, has its own human companion, a Caucasian woman named Samantha, who lost her parents as an infant and was subsequently adopted by Utam and the Himalayan animals. But there's an expedition to complete, and Lu Tien is adamant to have Utam captured alive at all costs.