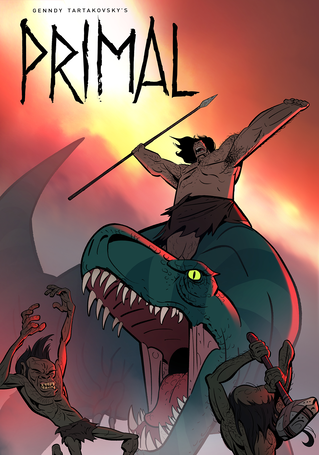 Hunt. Kill. Survive.
"All Earth was but one thought — and that was death."
— Darkness,

Lord Byron. Used as a tagline in the Season 1 trailer.

Genndy Tartakovsky's Primal, also known simply as Primal, is an Action Adventure animated series produced by Cartoon Network Studios for Adult Swim. It is the fifth animated series that Tartakovsky has created with the studio, and his second project with Adult Swim following the 2017 revival of Samurai Jack.

Originally billed as a limited series, Primal follows Spear, a caveman at "the dawn of evolution," and Fang, a tyrannosaur on the brink of extinction. Bonded by similar tragedy, the duo form an unlikely friendship that becomes their only mutual hope of survival in a violent, primordial world.

While Tartakovsky has previously experimented with stories light on dialogue in his previous shows, this series notably does not have any dialogue whatsoever, the only human vocalizations being animalistic grunts and yells (this changes in the second season, however, which introduces actual dialogue, although mostly in un-subtitled non-english). At the time of its debut, it was also notable for being one of the few adult animated dramas produced in the United States, and is currently the only one being produced for linear television as opposed to streaming.

The series was announced

on May 14th, 2019. The first half of Season 1 ran from October 7th to October 11th, 2019 (the first four episodes later being repackaged into a theatrical film entitled Genndy Tartakovsky’s Primal — Tales of Savagery), while the second half aired from October 4th to November 1st, 2020. Season 2 began airing on July 21st, 2022 and wrapped up in September 15th the same year. The trailer for the second season can be viewed here.

Not to be confused with the video game of the same name. Or the 2019 Action Thriller film.

"Of course, we have multiple layers masking our true inner selves: the uniforms of society, education in its highest form, lavish indulgences. We have evolved beyond creation's expectations. But under the right circumstances...facing a primeval threat...I assure you, gentlemen, that our evolution will revert back to its PRIMAL savage form: fighting for survival at the very cost of humanity."
Feedback

In the episode "Plague of Madness" Spear and Fang have a horrifying encounter when they are relentlessly pursued by a rampaging giant sauropod infected with a zombie-like disease after it was bitten by a zombified hadrosaur.

In the episode "Plague of Madness" Spear and Fang have a horrifying encounter when they are relentlessly pursued by a rampaging giant sauropod infected with a zombie-like disease after it was bitten by a zombified hadrosaur.