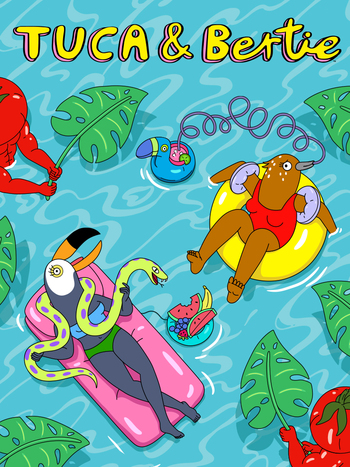 A relatable show for modern chicks, and other women too.
Advertisement:

The show follows the friendship between Tuca (Haddish), a cocky, carefree toucan, and Bertie (Ali Wong), an anxious, daydreaming songthrush, two thirty-something bird women who live in the same apartment building. As their lives begin to grow in different directions, they learn about the struggles and sacrifices that come with becoming an adult while holding onto old relationships.

Often described as BoJack's more upbeat, peppy, colorful, and less dysfunctional sibling, tackling some of the same topics like mental health and sexism but with a lighter touch thanks to its zanier humor, off-the-wall cartoon animation and preference for happy endings. It's also been called the Spiritual Successor to Rocko's Modern Life.

The show's first season premiered on Netflix on May 3rd, 2019, with ten episodes. Two months later, Netflix announced its cancellation. A year later, Adult Swim announced on its Twitter that it would be producing a second season, which began airing on June 13, 2021. It is the second series to make the jump from a streaming network to linear television, following One Day at a Time (cancelled by Netflix earlier the same year), and the first animated series to do so. Ahead of the second season finale, a third season was ordered for the network. The third season premiered on July 11, 2022. On November 2, 2022, it was announced that the show had been cancelled again after two seasons on Adult Swim.

Bertie slowly loses her sanity over the course of Tuca and Speckle being away from her for a prolonged period of time.

Example of:
Go Mad from the Isolation

Bertie slowly loses her sanity over the course of Tuca and Speckle being away from her for a prolonged period of time.