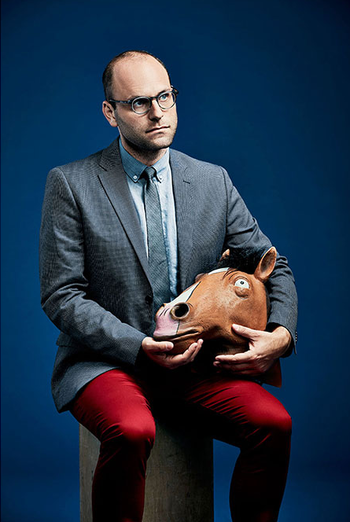 Raphael Matthew Bob-Waksberg (born August 17, 1984) is an American comedian, writer, producer, actor and voice actor best known as the creator and showrunner of the Netflix original animated series, BoJack Horseman. Bob-Waksberg also performs voices for various characters on the show, including a corgi and a tree frog. As a member of the Olde English comedy troupe, he co-wrote and appeared in The Exquisite Corpse Project. He was also the script doctor of The LEGO Movie 2: The Second Part.

In March of 2018, it was announced that Bob-Waksberg had signed a deal with Amazon to produce a new animated TV series he had co-created with BoJack Horseman writer Kate Purdy. The new series is an animated comedy-drama entitled Undone. The series revolves around a woman named Alma who discovers a "new relationship with time" after a near-fatal car crash and uses this to learn more about the truth behind her father's death. Aside from showrunning his two shows, he is also an executive producer on BoJack alumna Lisa Hanawalt's show, Tuca & Bertie.