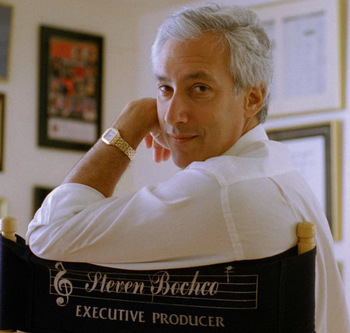 Steven Ronald Bochco (December 16, 1943 – April 1, 2018) was a television producer and writer. His best known work tended to be dramas that are set in a workplace, particularly some sort of legal setting, though he worked in different genres throughout his career. Many credit him with redefining the structure of TV dramas.

Bochco got his start as a writer and story editor for Universal Pictures. In 1978, he was hired by MTM Enterprises, where he began working a producer. His first big hit came in 1981 by co-creating, writing and producing the police drama Hill Street Blues. The show received acclaim for its innovations (having story arcs rather than being purely episodic as well as having a large regular ensemble cast) with the TV drama and won numerous awards. He was fired from MTM, though, after his sports comedy-drama Bay City Blues got cancelled after 4 episodes aired (4 more aired afterwards). He then moved to 20th Century Fox (which eventually acquired MTM) and co-created L.A. Law, which was also an acclaimed series. During production of that show, he met David E. Kelley, who was then a writer, and the two would co-create Doogie Howser, M.D. together before they went their separate ways.

In 1987, Bochco signed a 8 year deal with ABC (whose parent Disney acquired 20th Century Fox in 2019), where he agreed to produce 10 shows. It had flops like Cop Rock, a musical cop show, but it also had hits like NYPD Blue, which ran for 12 seasons and help popularize the anti-hero protagonist that would become more prevalent as, and after, the show aired. While short-lived, he made an influential show during this period called Murder One which, rather than having one case per episode, would instead see a case being investigation throughout the whole season, predating the concept in shows like 24 and various cable/streaming crime shows. He produced other shows for the network, but they tended to be lucky to last more than one season, even though a couple got critical praise.

Bochco got involved in internet TV through a show called Café Confidential, which consisted of 44 one-minute episodes, each featuring unscripted confessions by members of the public. He produced another legal drama, Raising the Bar, for TNT, but it was cancelled in its second season. His final show was the detective anthology Murder in the First for TNT, which lasted 3 seasons before getting cancelled. He was diagnosed with leukemia around the time the series began, and he would later die from the disease in 2018.

Bochco received several awards in his lifetime including ten Emmys and four Peabody awards. He received the TV Writing Achievement award from the Writers Guild of America and he was inducted in the Television Hall of Fame in 1996.

Shows that Bochco created or produced with TV Tropes pages include: