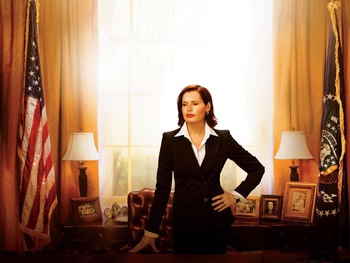 Commander in Chief was a drama series about a fictional President of the United States, which ran for one season (2005–06) on ABC.

The show centers around Mackenzie Spencer Allen (Geena Davis), the first female President, and her family. In the pilot episode she is serving as Vice-President under the Republican Teddy Bridges, who suffers a fatal stroke. Allen is an independent (she had been a moderate Republican during her brief congressional career, but had left the party), and learns that Bridges had wanted her to resign in the event of his death so that the ultra-conservative Republican Speaker of the House, Nathan Templeton (Donald Sutherland), would become President instead. Allen refuses, becomes President, and then has to deal with all those pesky problems that come with the office.

Episodes would generally trace a political problem and one or more family ones. The cast list is split between staff (Allen's chief of staff, the speaker and his chief of staff, and a few others) and family (the First Gentleman [i.e. the President's husband], their three children, and even the president's mother). Political plot lines in the show include things such as torture, hostages, and so on. Family plot lines involve the First Gentleman's difficulty with his wife being the leader and their teenage children's sexuality.

There were, of course, many comparisons with The West Wing, that other TV series about a U.S. president (which was enourmously popular, critically acclaimed, and tied for most Emmy-award-winning show of all time). Commander in Chief focused more on the president's family, which was only an occasional theme on The West Wing, and there were numerous other differences. However, the comparisons were generally not favorable; The West Wing was ending its run the same time Commander started, and many viewers were probably just disappointed that Commander in Chief was not, technically, The West Wing.

Commander in Chief was cancelled before its first season was complete; it ran for 18 episodes. Changes in producers and time slots are evidence of some difficulties with the show and its audience. Interestingly, it was the #1 show on Tuesday nights until American Idol took that honor, and the #1 new show of the season until Criminal Minds took over that slot. Its direct competition in its time slot was with House.