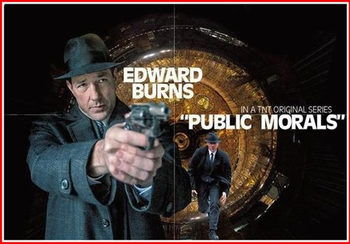 It's our job to curb all kinds of vice. That includes prostitution, pornography, degeneracy, and the Blue Laws. You got that, my man?
- Lt. King
Advertisement:

Public Morals is a police drama that premiered in 2015 on TNT and ran for one season; it was not renewed. It was created by Edward Burns, who also writes, directs, and stars in the series.

Set in 1965 New York City, the series focuses on the NYPD's Public Morals Division as it tries to police the city's appetite for vice. The cops of the division are fairly cynical about their work, believing that the best they can do is regulate such activity rather than try to stamp it out altogether. They have no problem with letting people have their fun as long as the players pay their "rent" and don't cause too much trouble. It's when people try to shake up the status quo that the cops start cracking down.

The show also examines the lives of working-class Irish Americans during the 1960's and the complicated familial relationships between cops and criminals.

Not to be confused with the 1996 sitcom and NYPD Blue Spin-Off of the same name.