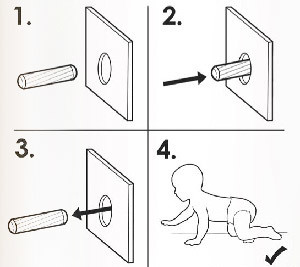 Some Assembly Required. Insert tab P into slot V.
"Then he put his thingie into my you-know-what and we did it for the first time."
— Ebony Dark'ness Dementia Raven Way, My Immortal
Advertisement:

IKEA Erotica is the tendency of badly written sex scenes to be very mechanical descriptions of who sticks what into where. It's named after the Swedish big-box store, which is famous for selling furniture that requires assembly with instructions along the lines of "insert Tab A into Slot B". IKEA Erotica is a sex scene written in basically that style, which end up being about as interesting as assembling furniture.

The point of erotica is to make the reader feel something of what the characters do, which in most cases should be arousal rather than boredom. In writing, sex isn't about sex, it's about the people having it and what they're feeling. But some writers don't get that, and they end up describing the physical mechanics of the sex. Sometimes it's a sign that the writer didn't want to include a sex scene but got overruled and initiated a Writer Revolt. More often, though, it's a sign that the writer is sexually inexperienced — they don't know anything about how sex feels, but only how it works, and that only from a biology textbook (sometimes likened to a description of "plumbing"). And sometimes not even then, which leads to poorly written Anatomically Impossible Sex. IKEA Erotica is one of the hallmarks of Fan Fiction by 14-year-old girls, examples of which are too numerous to list and too forgettable to remember.

But as always, Tropes Are Tools, and there are a number of reasons why IKEA Erotica might be deliberately included. It can be a parody of bad writing. It can be a way of Getting Crap Past the Radar. It can be an interesting insight into the psyche of a character who isn't good with emotions or doesn't like sex. It can be a way to denote that the character isn't enjoying the sex, or a possible clue to divulge the identity or perspective of a narrator.

It gets really weird when combined with The Body Parts That Must Not Be Named and/or Technical Euphemism.

The best way to avoid falling afoul of this trope is not to describe the sex at all — by all means show the characters and the emotional lead up to the act, then pull a Sexy Discretion Shot and come back when it's all over. What the characters feel about each other is more important than what they're doing to each other, and they should still be feeling it before and after they have sex. Alternatively, you could try Lewd Lust, Chaste Sex, when all the events leading up to the act are described in lascivious detail, but the deed itself is elided; it has the same effect but makes it more titillating.

See also Fetish Retardant and Narm, common consequences of IKEA Erotica, and Show, Don't Tell, which is a related piece of writing advice. Contrast with Mills and Boon Prose.