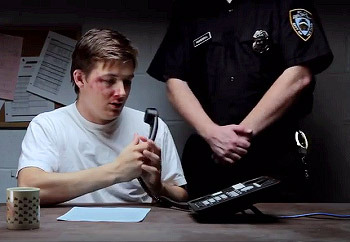 "You got one call, son. Make it a good one."
"Freeze! You're under arrest. You have the right to the remains of a silent attorney! If you cannot afford one, tough noogies! You can make one phone call. I recommend Trixie 976-555-LOVE."
— Crais, Farscape, "Won't Get Fooled Again"
Advertisement:

Subtrope of Hollywood Law. You've been arrested. You might be entirely innocent, you might be guilty as hell, but there are certain things you can count on. Someone will be Reading Your Rights, perhaps with some modifications for the purposes of humour. You'll get cuffed, taken down to the station and questioned. And you have the right to one phone call, no more, no less; even if the call doesn't go through due to some technical glitch (or is interrupted by a Corrupt Hick or the like), you don't get a second call.

You're expected to use this to call your lawyer, or your mother, or your sister, or whatever, and if you're in a drama, you probably will. If you're in a comedy, and the arrest was for harassing someone over the phone, you'll most likely ring them. If the arrest was for something else, you'll likely just order a pizza. If you're The Joker, everybody else better take cover.

Naturally, Real Life is not like this. You are not necessarily entitled to a phone call, although police are often perfectly happy to give them because people often incriminate themselves over the phone. In most jurisdictions, phone calls are privileges. The police can let you make many (if you're nice and cooperative) all the way down to none (if you're being a jerk). However, you do have the right to an attorney at any time—and the police more or less have to let you call that person enough times to get in touch and make sure that they're on their way. So if you can't get a hold of anyone on the phone, it's not like you'll just have to wait until someone on the outside notices you're missing.