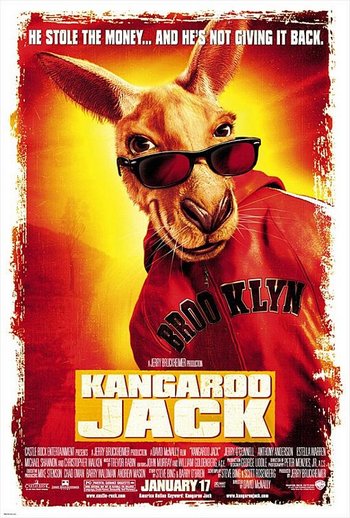 This kangaroo isn't the main character.
"I put the money in the jacket, and the jacket on the kangaroo, and now he's hopping away!"
— Louis Booker
Advertisement:

Charlie Carbone (O'Connell) wants to make his stepfather (Walken) happy. He has his own beauty salon, and he does well, but certain complications keep him from turning more than a bare profit—complications like mob payments. Oh, and by the way, this local mob is controlled by Salvatore "Sal" Maggio. Who happens to be Charlie's stepdad. So, obviously, Charlie wants to make his stepdad happy, because when Sal is unhappy, people tend to disappear.

After Charlie and his best friend Louis Booker (Anderson) botch their first job delivering stolen televisions (bringing the police down on Maggio's people), Sal's apprentice Frankie (Shannon) decides to give them one more chance to redeem themselves, by delivering $50,000 to a Mr. Smith (Csokas) in Australia, and if they have any trouble, just call Mr. Smith and he will take care of everything. Too bad Sal has given Smith special instructions to "take care of" Charlie and Louis. And things go from bad to worse when a kangaroo runs off with the money they are supposed to deliver...

Although the film was initially shot as a full-on R-rated gangster comedy to be entitled Down and Under, it was hastily edited down for a PG rating at the last minute, and the film's marketing instead spun it as a kid-friendly talking kangaroo film (despite said kangaroo only having a scant few minutes of screen time). It eventually released in January 2003, and was almost universally panned by critics, gaining widespread infamy for its deceptive marketing and expectedly rather adult overtones left over from the original cut. The ploy worked, however, as it became a modest hit at the box-office (grossing over USD 150 million worldwide) during its brief theatrical run.

An animated sequel entitled Kangaroo Jack G Day USA was produced by Warner Bros. Animation and released Direct to Video in 2004. It notably redressed a lot of the original’s complaints by being both far more straightforwardly kid-friendly and giving the titular kangaroo an actual prominent role in the story.