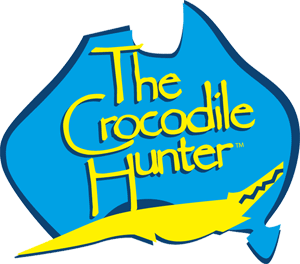 "Crikey!"
Real life adventures of the Australian conservationist Steve Irwin, the curator of Australia Zoo in Queensland, as he studied and captured crocodiles, either to relocate them or to take them for his zoo. Oh, and he also sometimes studied (but rarely captured) snakes.
Advertisement:

The show was full of physical action as Irwin and his mates jumped on crocodiles all at once and restrained them with rope and duct tape. He was also shown hand-feeding crocodiles, and distracting them while the rest of his staff raided the crocodiles' nest for the eggs to incubate.

The show offered an unbeatable combination of old-fashioned derring-do with a strong conservationist message. It also gave parodists a field day, and (perhaps unintentionally) did much to contribute to the stereotype of the "Australian Naturalist" as a khaki-clad testosterone-fueled adrenaline junkie whose passion for up-close-and-personal encounters with large, dangerous, or deadly animals bordered on protracted suicide.

Irwin made several other movies and documentaries with conservationist themes, enlivened by his bubbly Larrikin personality and his Catchphrase, "Crikey!", and he soon became perhaps the world's most visible and charismatic spokesman for the environment, filling a role left empty by the death of Jacques Cousteau. Irwin even produced and starred in The Movie of his TV show, Crocodile Hunter: Collision Course, in which a crocodile accidentally swallows a top-secret government satellite that falls to earth, and Irwin and his wife Terri are unwittingly caught in the middle as they try to film their TV show.

There were also a few spin-off series. The Crocodile Hunter Diaries, frequently abbreviated by Steve himself to Croc Diaries, was focused more on the general day-to-day work around the zoo and the personal lives of both Steve and some zoo personnel. Croc Files, on the other hand, was aimed at children and featured Steve and Terri discussing various wildlife topics, intermixed with fun facts and footage of Steve interacting with animals.

Despite all the crocodile antics, they were not the ones to kill him. Irwin died in a freak accident with a stingray while diving. He was mourned worldwide. And, in a stunning case of general oddity, many Aussies went on stingray-butchering rampages in the name of one of the most famous animal lovers in history. They were called out on this, as people said that that's not what Steve Irwin would have wanted. Perhaps even more bizarrely (though far less disturbingly), Philadelphia Phillies fans used Irwin as a rallying cry during their successful 2008 World Series run against the Tampa Bay Rays.

Irwin's legacy lives on in the family he leaves behind: his wife Terri, who often served as his sidekick on Crocodile Hunter, their son Robert and their daughter Bindi, who continue their father's work in the capacity of "junior animal activists." Bindi has starred in the Direct to Video film Free Willy: Escape From Pirate's Cove, and had her own kids' show, Bindi's Bootcamp, which ran from 2012 to 2015. Nowadays, Robert Irwin is most well-known for his appearances on The Tonight Show with Jimmy Fallon, where many people have noted that his excitement and enthusiasm for animals is very similar to his father.

In October 2018, Terri, Bindi, and Robert started a new show on Animal Planet, Crikey! It's the Irwins. The show, which has more in common with Croc Diaries than The Crocodile Hunter, follows the family's day-to-day work at Australia Zoo as well as their adventures around the world doing conservation work, intermixed with archive footage of Steve.

The Irwins and their film and television work provide examples of the following: