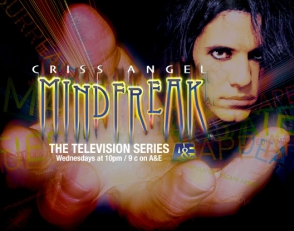 Are you ready?
"When the mind, body, and spirit work together, I believe anything is possible."
— Criss Angel
Advertisement:

Criss Angel is a magician who performs on the street. Close up. In impossible conditions. Anything that a normal magician can do on a stage with props, Criss Angel can do live without them. From simple levitation to being sent through a woodchipper and surviving, he is a major fan of Don't Try This at Home stunts.