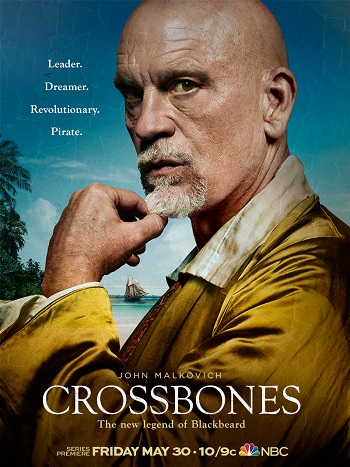 Crossbones is an NBC historical adventure series created by Neil Cross (Luther, Doctor Who). It stars John Malkovich as the legendary pirate Edward Teach, a.k.a. Blackbeard and is set in 1715 on the island of Santa Campana, where he has set up rule as leader of the New World's first functioning democracy. As the series opens, Blackbeard's crew launches a fierce raid on an English vessel in an attempt to capture a valuable navigation device: a longitudinal chronometer. When the ship's physician, Tom Lowe (Richard Coyle), destroys the device, he is taken prisoner and brought to Blackbeard so he can be convinced to reassemble it. What Blackbeard doesn't know, however, is that Lowe is secretly an English spy and assassin assigned to kill the Pirate ruler.

The show is loosely based on the book The Republic of Pirates by Colin Woodard. It premiered May 30th, 2014. The trailer can be seen here