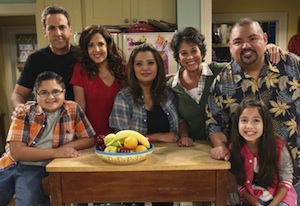 Cristela (center), her family, and Alberto
Cristela is a sitcom that aired on ABC during the 2014-2015 TV season before being cancelled. It was created by, and starred, Cristela Alonzo as Cristela, a law student who's had to repeatedly put her studies on hold in order to work and make money to pay her own way through school. Cristela is finally close to earning her law degree and has landed an unpaid internship at a prestigious Dallas law firm.
Advertisement:

Making things complicated for her is that Daniela, her sister, is urging her to give up on her dreams and to take any paying job while Felix, Daniela's husband, makes it abundantly clear that he doesn't like having Cristela living in his home for free. Natalia, Cristela's mother, merely wants her younger daughter to get married and give her more grandchildren and doesn't really understand why Cristela would want to become a lawyer.

The show is notable in that it is the first sitcom in American television history to have a Latina as its star.