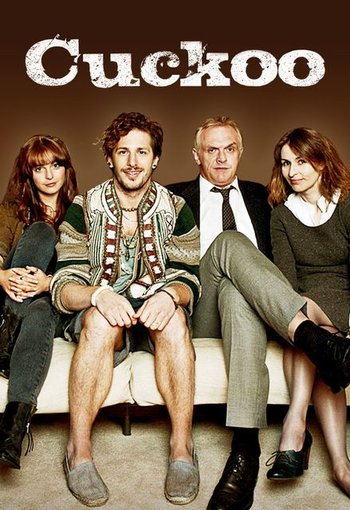 Cuckoo is a 2012 comedy series on The BBC, starring Andy Samberg, Greg Davies and Helen Baxendale.

It revolves around Ken and Lorna, a couple of middle-England parents who go to pick their daughter Rachel, a promising medical student with a university placement at Bristol, up from the airport upon her return from her gap-year travels only to get a bit of a shock when she reveals she has gotten married to Cuckoo, a modern young New-Age Retro Hippie type. As Rachel is busy sorting out her educational future and Cuckoo is in the process of writing a self-help book that he is convinced will put him somewhere between Jesus and Gandhi, they move back into the family home, an arrangement that works very well for them but less so for Ken. For while Cuckoo's eccentric ways manage to win over Lorna, strait-laced Ken is hardly convinced, perceiving himself as the Only Sane Man while his home is invaded by an idiot with a questionable perception of personal space.

Series 2 introduced two major cast changes: Tamla Kari (Rachel) was replaced by Esther Smith, and Cuckoo was written out because of Andy Samberg's other work commitments and replaced by his long lost son Dale (Taylor Lautner). It also introduced a new regular character in the form of Rachel's new boyfriend Ben (Matt Lacey); a safe and boring solicitor who works with Ken and Rachel.

The series provides examples of the following tropes;