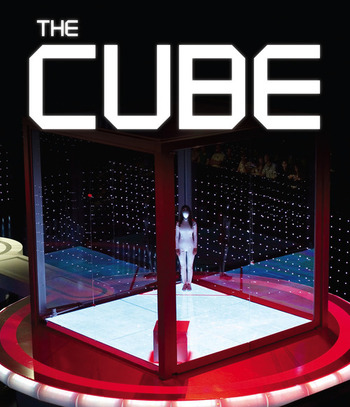 Can you beat The Cube?
Advertisement:

An ITV Game Show where players try to perform various physical and mental challenges. Completing a challenge allows the player to go on to the next level (and increases their potential winnings), or else they lose one of their nine lives. Completing all 7 challenges earns the player a grand prize of £250,000, while losing all nine lives ends the game. Players also have chances to simplify a task or practice it beforehand.

There's one more thing, however: the contestant also has to do these challenges inside a giant four metre wide acrylic glass cube. Plus, unlike most game shows patterned off of Who Wants to Be a Millionaire?, every level is All or Nothing, there are in fact no safe points at all (unless you bail out before you commit yourself to the next game, which is the only time you're actually allowed to quit by the way).

For what The Cube may or may not lack in originality (stunt game shows are not a new idea; see Beat the Clock), the show's production style more than makes up for it, with clever use of CGI and innovative camerawork. Plus, a lot of the challenges are quite ingenious in their own right.

The show was quite a hit for ITV, running from 2009-2015. It has also spun off several international versions, most of which were filmed on the set of the British version. Over in America, CBS had greenlit a pilot for an American version with Neil Patrick Harris as host not long after the first series wrapped in the UK, but Minute to Win It likely stole their thunder.

In 2020, The Cube was revived as The Million Pound Cube; its top prize was increased to £1,000,000, and the game is now played by two-player teams (with some games played solo, and some played by both). The second series revered back to the original money tree. In 2021, TBS picked up a long-awaited U.S. version of The Cube, with Dwyane Wade as host and a $250,000 top prize; in 2022 it was renewed for a second season.