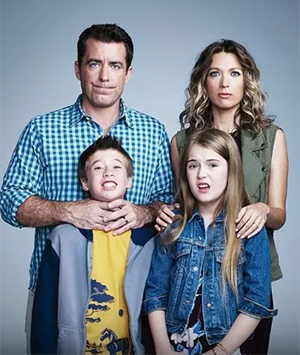 The Detour is a comedy series on TBS created by Jason Jones and Samantha Bee of The Daily Show with Jon Stewart fame. The series stars Jones as Nate Parker Jr., a businessman with his wife Robin (Natalie Zea) and kids Delilah and Jared.

In the first season, Nate takes his family on a road trip from their native Syracuse to Florida. Along the way, they suffer through a series of mishaps and disasters. The second season features the Parkers moving to New York City and struggling to fit in there. The third season follows their move to Alaska. The fourth (and final) season, which premiered on June 18, 2019, begins with Delilah on the run and the rest of the family traveling the globe trying to track her down.

The Detour contains examples of: