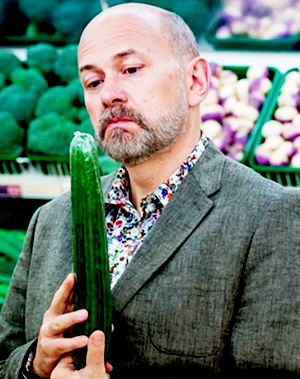 This definitely reminds me of something...
I read this article once —- it said there's an institute in Switzerland dedicated to sex, and they published this report. They spent ten years studying the male erection. And they came up with a scale for measuring hardness. They said there's four categories of hard-on, from soft to hard, starting with the softest. Number one: they called that tofu. Number two is peeled banana. Number three: banana. Number four: cucumber.

Cucumber is a 2015 TV series by Russell T Davies (aired on Channel Four) which revolves around an older generation of gay life in Manchester. It acts as a sequel of sorts to Queer as Folk. The main characters are a settled cohabiting couple, Lance (played by Cyril Nri) and Henry (Vincent Franklin) who have a terrible date night in the first episode.

It has two companion shows. Banana (on E4) is an Anthology series of one-off episodes featuring minor characters from Cucumber, while Tofu (on 4oD) features the actors and members of the public discussing sex, usually with an LGBT focus. For the sake of simplicity, any tropes from either will be listed on this page.

Cucumber & Banana both contain examples of: