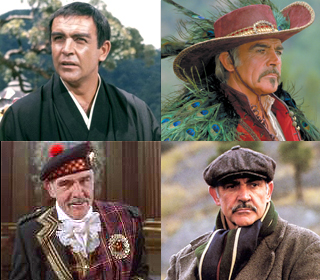 Sean Connery clockwise from top right: Egyptian (dressed as a Spaniard), Irish, Scottish, and Japanese James Bond.note Highlander, The Untouchables (1987), The Avengers (1998), You Only Live Twice
Chandler: Alright boys, I confess. I was Abie the fish peddler.
Ravelli: How did you get to be Roscoe W. Chandler?
Chandler: Say, how did you get to be an Italian?
Ravelli: Never mind. Whose confession is this?
— Animal Crackers
Advertisement:

When an actor plays a native of a nationality or area other than their own. Not counting those actors who play an extraterrestrial, who are never from the same place as their character. Probably. Nowadays can be known as Colorblind Casting.

Israeli Jewish and Arab actors tend to wind up playing each other quite frequently (though Israeli-for-Arab is more common than the other way around). Gung-ho movies made during World War II featured every kind of Asian except Japanese, since the Japanese-American actors were otherwise occupied. And very few Russian characters during the Cold War were played by native Russians. For foreign actors who are frequently employed to play foreign characters, see Plays Great Ethnics.

This is much more common in voice-acting because the actor's appearance is irrelevant, and a good voice actor can hide their accent or imitate well a foreign one.

The Queen's Latin is a related trope where characters in Ancient Grome or other classical-to-medieval settings are usually played by Brits, no matter what part of Europe they're actually from. See also: Fauxreigner where the character is pretending to be a nationality they aren't (or acting more stereotypical than they actually usually do).

If you are actually from the area in question, you may remember one or more of these examples as "That foreigner with a strange accent. Where are they supposed to be from?" On the other hand, some actors are really good at it. An added complication is that human appearance varies even within nationalities and ethnicities. As a result when playing a historical character the foreigner might have been selected because they greatly resembled the original.

An actor who often does this well Plays Great Ethnics. When done poorly, it can result in What The Hell, Casting Agency?.

See Pass Fail when, for whatever reason, the actor isn't convincing as another nationality.