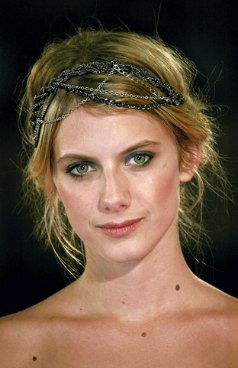 Mélanie Laurent (born February 21, 1983 in Paris, France) is a French actress and director.

Internationally, she's best known as Shosanna Dreyfus in Inglourious Basterds. She's starred in a number of other movies in her native France, such as Don't Worry I'm Fine, The Concert, and The Beat That My Heart Skipped. She has also directed five films.

Her father, Pierre Laurent, is a professional voice actor, best known for being the French voices of Ned Flanders, Barney Gumble, Apu Nahasapeemapetilon, Smithers and countless others in The Simpsons.