Film / Return of the Hero 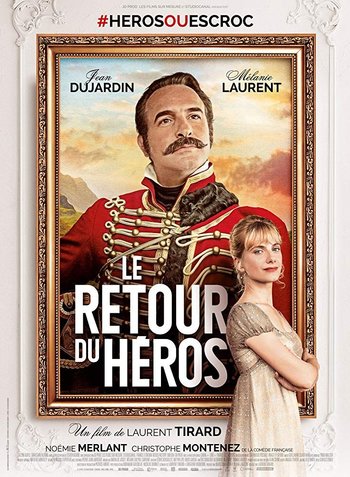 The story is set in France in 1809. Captain Neuville (Dujardin) proposes to Pauline Beaugrand. Pauline and her parents gleefully accept, but her sister Élisabeth (Laurent) is worried, because she thinks that Neuville is insincere. The wedding cannot take place, because Neuville must go to fight in a war against Austria. He promises Pauline that he will write to her every day. Time passes, but Pauline does not receive any letter. She is so depressed that Élisabeth starts writing letters that she signs with the name of Neuville, in order to cheer her sister up.

After a period of three years or so, the long missing Capt. Neuville turns up — a dirty, smelly bum, who deserted from the army. A shocked Élisabeth, who sees him in the marketplace, hustles him on a carriage out of town, but not before she tells him about her deceptions. He surprises her by returning again, dressed in a gentleman's clothes, playing the part of the dashing cavalier that Élisabeth invented for him. Élisabeth realizes that she can't tell on him without revealing that she faked his letters for years.

Return of the Hero provides examples of: