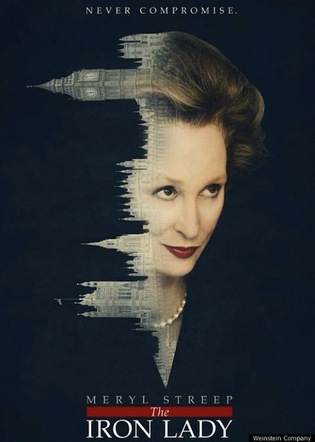 You know she's not the real Margaret Thatcher because she's smiling.
"Watch out, looking back. Don't dig too deep—you don't know what you might find..."
— Denis Thatcher's ghost
Advertisement:

The Iron Lady is a 2011 Biopic about Margaret Thatcher starring Meryl Streep in an Oscar-winning performance as the eponymous character. The film uses the framework of Thatcher's dementia to look back on the fragments of her life through her increasingly-feeble grip on reality and memory.