Film / I See a Dark Stranger 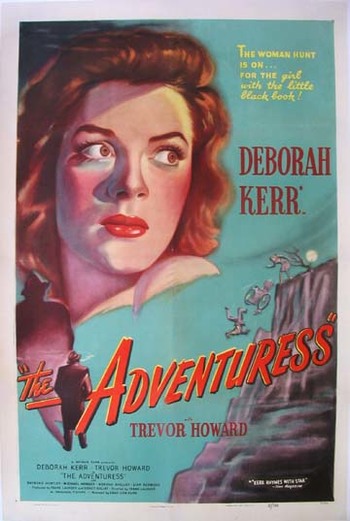 I See a Dark Stranger is a 1946 spy comedy directed by Frank Laudner, starring Deborah Kerr and Trevor Howard.

Ireland, 1944. Bridie Quilty is a beautiful, spirited, but not terribly bright young Irish woman. After growing up listening to her father's almost certainly untrue stories of The Irish Revolution, Bridie has developed an abiding hatred for English people. When she turns 21 she goes off to Dublin and attempts to join the IRA, but the old IRA leader she approaches, now content with an independent Ireland, blows her off.

However, Mr. Miller, a man she meets on the train, takes her more seriously. Miller is actually a Nazi spy, who is headed to England with the intention of breaking another Nazi spy, Oscar Pryce, out of jail. Recognizing Bridie's potential as a Honey Pot, he recruits her into becoming a German agent. They travel to the British village of Wynvale, near where Pryce is being held, and Bridie uses her good looks to worm information out of guards at the prison. When a British intelligence agent, Lieutenant David Baynes (Howard) shows up in Wynvale, Miller orders Bridie to flirt with him in order to distract him from the prison break.

Using Bridie's info, Miller breaks Pryce out—but the British send out patrols, Pryce is shot dead, and Miller is mortally wounded. It's Bridie herself who winds up going off to the Isle of Man to retrieve Pryce's intelligence. Following after her is David, who's fallen in love with her. He has to figure out how to stop the Nazi plot and stop Bridie from going to prison for espionage.