Film / I Want Someone to Eat Cheese With 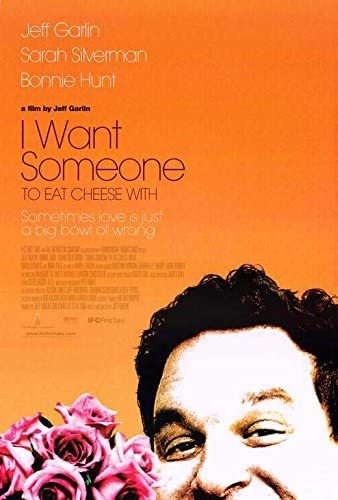 I Want Someone to Eat Cheese With is a 2006 Romantic Comedy film written by, directed by, and starring Jeff Garlin and featuring such talents as Sarah Silverman, David Pasquesi, Bonnie Hunt, Amy Sedaris, Mina Kolb, Dan Castellaneta, and Elle Fanning.

Garlin plays James Aaron, a Chicago actor struggling with a lack of notability and his weight. He's 39, lives with his mother, and is rapidly going nowhere in his life. In rapid succession, his girlfriend breaks up with him, his agent fires him, and he loses his job with Second City, a local comedy troupe. Fortunately, he meets two wonderful women in his life, Stella and Beth. Unfortunately, neither of them seem able to look past his weight. Meanwhile, he learns that a remake is being made of Marty, a film he's perfectly suited toward.