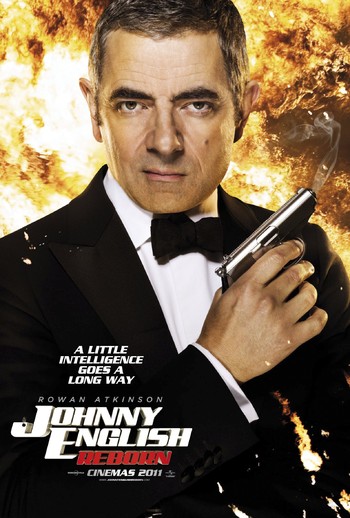 One man. One mission. No chance.
Ambrose: Welcome back. How long has it been?
Johnny English: Oh, I don't know, five years, three months and six days. Or something.
Advertisement:

Johnny English Reborn (released in some countries as Johnny English Returns) is a British spy comedy film parodying the James Bond secret agent genre. The film is the sequel to Johnny English, and stars Rowan Atkinson reprising his role as the title character and directed by Oliver Parker. It was released on 15th September, 2011.

In the years since MI-7's top spy vanished off the grid, he has been honing his unique skills in a remote region of Asia. But when his agency superiors learn of an attempt against the Chinese premier's life, they must hunt down the highly unorthodox agent. Now that the world needs him once again, Johnny English is back in action. With one shot at redemption, he must employ the latest in hi-tech gadgets to unravel a web of conspiracy that runs throughout the KGB, CIA and even MI-7. With mere days until a heads of state conference, one man must use every trick in his playbook to protect us all. For Johnny English, disaster may be an option...

This film is followed by Johnny English Strikes Again, released in 2018.