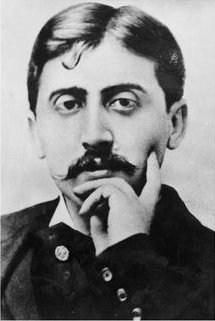 "Only in suffering do we realize beauty".
Advertisement:

Valentin Louis Georges Eugène Marcel Proust (10 July 1871 – 18 November 1922) was a French novelist, critic and essayist best known for his monumental À la recherche du temps perdu (In Search of Lost Time; earlier translated as Remembrance of Things Past). It was published in seven parts between 1913 and 1927.

Proust was born in Auteuil (the southern sector of Paris' then-rustic 16th arrondissement) at the home of his great-uncle, two months after the Treaty of Frankfurt formally ended the Franco-Prussian War. His birth took place during the violence that surrounded the suppression of the Paris Commune, and his childhood corresponds with the consolidation of the French Third Republic. Much of In Search of Lost Time concerns the vast changes, most particularly the decline of the aristocracy and the rise of the middle classes that occurred in France during the Third Republic and the fin de siècle.

Proust's father, Achille Adrien Proust, was a prominent pathologist and epidemiologist, responsible for studying and attempting to remedy the causes and movements of cholera through Europe and Asia; he was the author of many articles and books on medicine and hygiene. Proust's mother, Jeanne Clémence Weil, was the daughter of a rich and cultured Jewish family from Alsace. She was literate and well-read; her letters demonstrate a well-developed sense of humour, and her command of English was sufficient for her to provide the necessary assistance to her son's later attempts to translate John Ruskin.

By the age of nine, Proust had his first serious asthma attack, and thereafter he was considered a sickly child. Proust spent long holidays in the village of Illiers. This village, combined with recollections of his great-uncle's house in Auteuil, became the model for the fictional town of Combray, where some of the most important scenes of In Search of Lost Time take place. (Illiers was renamed Illiers-Combray on the occasion of the Proust centenary celebrations.)

In 1882, at the age of eleven, Proust became a pupil at the Lycée Condorcet, but his education was disrupted because of his illness. Despite this he excelled in literature, receiving an award in his final year. It was through his classmates that he was able to gain access to some of the salons of the upper bourgeoisie, providing him with copious material for In Search of Lost Time.

Despite his poor health, Proust served a year (1889–90) as an enlisted man in the French army, stationed at Coligny Barracks in Orléans, an experience that provided a lengthy episode in The Guermantes' Way, part three of his novel. As a young man, Proust was a dilettante and a social climber whose aspirations as a writer were hampered by his lack of discipline. His reputation from this period, as a snob and an amateur, contributed to his later troubles with getting Swann's Way, the first part of his large-scale novel, published in 1913.

Proust had a close relationship with his mother. To appease his father, who insisted that he pursue a career, Proust obtained a volunteer position at the Bibliothèque Mazarine in the summer of 1896. After exerting considerable effort, he obtained a sick leave that extended for several years until he was considered to have resigned. He never worked at his job, and he did not move from his parents' apartment until after both were dead.

Proust, who was homosexual, was one of the first European novelists to mention homosexuality openly and at length in the parts of À la recherche du temps perdu which deal with the Baron de Charlus.

His life and family circle changed considerably between 1900 and 1905. In February 1903, Proust's brother Robert married and left the family home. His father died in November of the same year. Finally, and most crushingly, Proust's beloved mother died in September 1905. She left him a considerable inheritance. His health throughout this period continued to deteriorate.

Proust spent the last three years of his life mostly confined to his cork-lined bedroom, sleeping during the day and working at night to complete his novel. He died of pneumonia and a pulmonary abscess in 1922. He was buried in the Père Lachaise Cemetery in Paris.