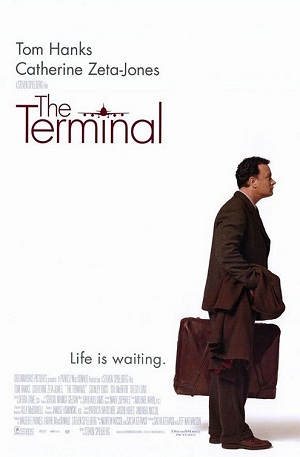 The Terminal is a 2004 comedy-drama film directed by Steven Spielberg, starring Tom Hanks, Catherine Zeta-Jones, Stanley Tucci, and (in an early appearance) Zoe Saldaña. It was loosely based on the true story of Mehran Karimi Nasseri, an Iranian man who fell into a legal loophole at Charles De Gaulle airport and had to live there for 18 years.

Victor Navorski (Hanks), a man from the fictional country of Krakozhia, has arrived in New York City, more specifically at JFK International Airport. But there's a problem: During his flight, Victor's country ceased to exist due to a civil war. He can't leave the airport to go into the city, and he can't fly home, since his country technically doesn't exist anymore. So he starts living in the airport terminal, making friends with various workers, and developing feelings for a flight attendant named Amelia (Zeta-Jones).