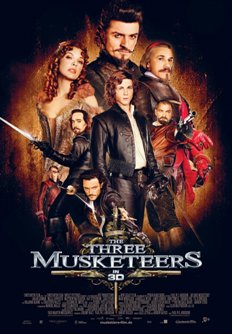 The Three Musketeers is a 2011 film directed by Paul W.S. Anderson, loosely based on the novel The Three Musketeers by Alexandre Dumas. It stars Logan Lerman as D'Artagnan, Matthew Macfadyen, Luke Evans, and Ray Stevenson as the three Musketeers, and Christoph Waltz, Orlando Bloom, Mads Mikkelsen and Milla Jovovich as the villains.

Among the many films of the novel, it stands out by taking the story into an Alternate History setting with elements of Clock Punk. Most notably, it has airships. Otherwise, however, it is a surprisingly faithful take on the novel as far as its adaptations go.