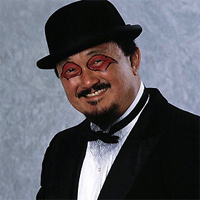 Harry Masayoshi Fujiwara (May 4, 1934 – August 28, 2016) was a Japanese-American professional wrestler, manager and trainer from Honolulu, Hawaiʻi who is best known for his work in WWE as Mr. Fuji. He debuted in 1965 in Hawaii and would go on to compete for a variety of territories. He switched from wrestling to managing in 1985 and would continue in that role until he retired in 1996. Among his in-ring achievements, he was a 5x WWE World Tag Team Champion

. As a manager, he led Demolition to their first WWE World Tag Team Title reign and Yokozuna to his two WWE World Heavyweight Title

During his post-wrestling career—one that did see him continue to occasionally wrestle—one of Fuji's most famous acts was teaming with his protege, the Magnificent Muraco, for a series of television parodies that aired on the WWF's USA Network program Tuesday Night Titans. The whole thing was a classic Abbott- and Costello-esque storyline of a bad acting duo wanting to break into the movies and looking for their first big break; among the shows featured in these parodies were Miami Vice and General Hospital.

But Fuji's most memorable contribution to 1980s wrestling fans was that of manager. At one point in 1987, he managed seven wrestlers at one time, more than any then-active WWF manager (including Bobby Heenan, during André the Giant's mid-1987 sabbatical from the ring note (between WrestleMania III and shortly before the 1987 Survivor Series)); those wrestlers who were simultaneously under Fuji's tutelage in the spring and early summer of '87 were Sika, Kamala, Killer Khan, Demolition (Ax and Smash), the Magnificent Muraco and "Cowboy" Bob Orton. Besides Demolition, whom he managed as Tag Team Champions (during the early months of their reign), Fuji's most successful protege was Yokozuna, a Polynesian wrestler using a sumo wrestler gimmick; Yokozuna was WWF World Heavyweight Champion for nine months in 1993 and 1994, successfully defending his title against Bret Hart, Lex Luger, Razor Ramon, Bob Backlund, Randy Savage and The Undertaker before dropping the title to Hart at WrestleMania X.