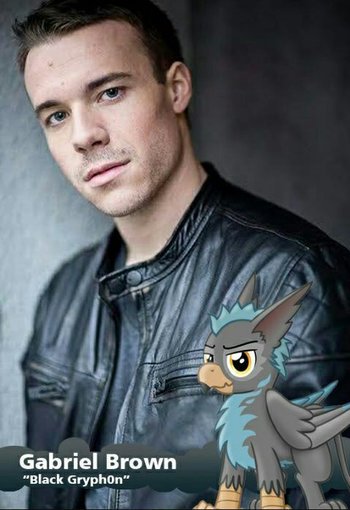 "Are we there yet?"
Advertisement:

Black Gryph0n (real name Gabriel C. Brown) is a YouTube musician and voice actor who first got his start writing fan songs for the My Little Pony: Friendship Is Magic community. His first few songs "Proud to Be a Brony" and "Crusader (Are We There Yet?) ", as well as his appearances in AC Racebest's series "Bronies React" made him a household name in the brony fandom. He's also done work as a male background vocalist for MLP, and is close friends with several of the show's cast members.

In 2014, he began producing and releasing his own music, often in collaboration with his brother Nathanael (a.k.a Baasik) or Michelle Creber, the voice of Applebloom.

video which has amassed over 120 million views.

Black Gryph0n and his music exhibit examples of these tropes: