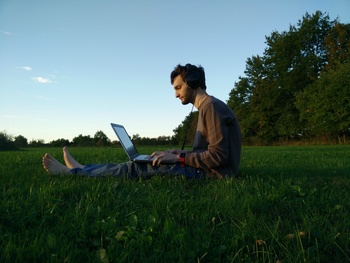 The man at work.
Advertisement:

, is a YouTube-based electronic musician from Tel Aviv, Israel. His unique musical style combines bouncy, circus-like instrumentation with dirty, growling basslines. Landau is mostly known for his remixes and fan music for various media, including Five Nights at Freddy's, Undertale, and My Little Pony: Friendship Is Magic. He has also done a few original songs, such as "Cut the Cord

" and "My Ordinary Life

", and composed the OST for In Sound Mind.

During his time producing content for the Friendship is Magic fandom, he was arguably considered the face of the fan-music scene, but he later branched out and started making songs about other subjects, starting with a song about Five Nights at Freddy's that went viral and effectively turned him into a YouTube celebrity. While he was popular before releasing this song, it was a major tipping point for his channel in terms of popularity.

He is also notable for providing music for the fifth installment of Tom Ska's ASDF Movie series. His remix

of EurobeatBrony's Discord was available as a downloadable track on the Rock Band Network, but has since been delisted.

Songs by The Living Tombstone contain the following tropes: