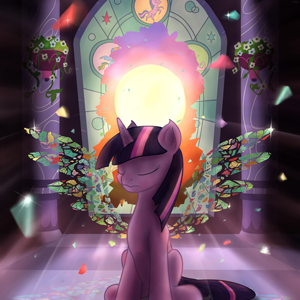 Everything is going to be fine.
Somebody told me of
A silly little thing
Called destiny
Go unchecked
I'll go blind
Finding how it got the best of me
— Twilight Sparkle, Like You

Destiny: A Tale of Unicorn Wings is a My Little Pony: Friendship Is Magic Rock Opera by Elizabeth L.K. Icarus Gray, better known as HeyLasFas!, expanding upon the events that take place during and after the season three finale, Magical Mystery Cure. Twilight Sparkle, after coronated as Equestria's new princess, must leave Ponyville adjust to her new life and duties.

It goes about as well as you'd expect.

It can be found on Bandcamp here

Not to be confused with Destiny.

Destiny: A Tale of Unicorn Wings contains examples of: