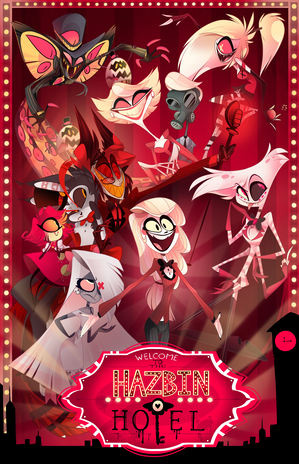 Such a lovely place. note  From the bottom left to right: Vaggie, Charlie, Angel Dust, Niffty, Husk, Alastor, Sir Pentious and his Egg Bois, Katie Killjoy, Tom Trench, Cherri Bomb. That's not even all.
"Ladies and gentlemen, I'm opening the first of its kind: a hotel that rehabilitates sinners!"
— Charlie
Advertisement:

You know that old line of "when Hell is full" and all that? Well, Heaven has a solution to that little problem: annual purges of the population. It's not pretty (then again, nothing in Hell usually is), but it gets the job done. That is until one day when Charlie Morningstar, the princess of Hell, proposes an alternative: sick and tired of losing so many of her people, she has set up a project to reduce the population of Hell by reforming damned souls and sending them to Heaven.

Of course, this plan gets mocked as a pipe dream, but with a little support from a mysterious and extremely powerful demon named Alastor, known throughout Hell as the "Radio Demon", her dream may yet become a reality. The show is centered on the exploits and misadventures of Charlie, her girlfriend Vaggie, and their first client — a spider-like drag-queen mobster/pornstar named Angel Dust — as they try to reform the various types of demons that come into their hotel.

The pilot episode was released in October 28, 2019, and can be found here

on YouTube. On August 7, 2020, the media company A24 announced that they had picked up

Hazbin Hotel to air on television, with the first full season set to premiere sometime in late 2022. Also see the official website

, which includes comics based on this show.

See also Helluva Boss, another show made by Vivienne set in the same universe but telling a mostly disconnected story starring Blitzo,note the 'o' is silent a low-level imp of Hell who dreams of running his startup company... which happens to specialize in assassinating still-living humans who screwed over the residents of Hell during their mortal lives.