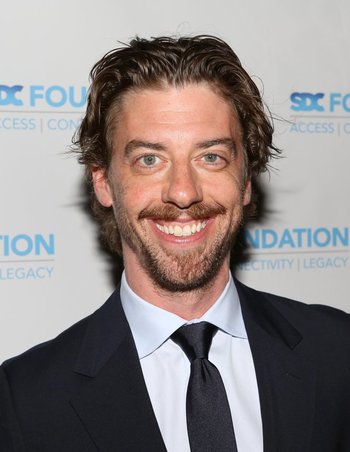 Christian Dominique Borle (born October 1, 1973 in Pittsburgh, Pennsylvania) is an American actor, best known for theatre of which his roles are extensive, but also was a lead in the TV show Smash. He is of French heritage but from Pennsylvania and after seeing Star Wars wanted to be a comic artist until participating in a school play in high school. He then studied acting at college, where he began dating future (ex-)wife Sutton Foster, and moved to New York.

We're not going to say that the rest is history because anecdotally his first acting gig was as a Macy's elf. His next was as a pinball kid in a German production of Tommy. One of his first big Broadway roles was replacing Gavin Creel in Thoroughly Modern Millie to be acting alongside Sutton Foster from 2002, in 2017 he joined the cast of Foster's show Younger. He also has quite a resemblance with Tim Curry, his Spamalot co-star, at times. He has two Tony Awards.