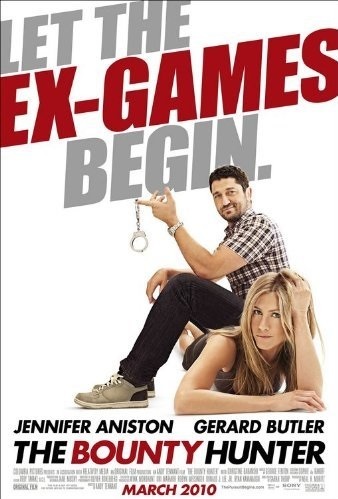 Milo Boyd (Butler) is a former New York Police Department detective who works as a bail enforcement agent (bounty hunter). Milo's ex-wife, Nicole Hurley (Aniston), is an investigative reporter. When Nicole receives a tip on a story, an apparent suicide that may have been a murder, she skips her bond hearing (after been arrested for assaulting a police officer) to meet her informant, causing the judge to revoke her bail and issue a warrant for her arrest. Milo is ecstatic when Nicole's bail bondsman, Sid (Jeff Garlin) offers him the job of bringing her to jail, for a bounty of $5,000. Milo apprehends her at a race track in New Jersey, and is not interested in explanations until Nicole admits that she's found evidence that implicates their mutual friend and Milo's ex-partner on the police force is involved in the story she was following, and Milo decides to investigate with her.